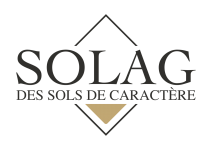 Encaustic cement tiles tell the history of the region: Provence

It was at Viviers (Ardèche) that Etienne Larmande, a local building contractor, discovered that “hydraulic lime, alone or mixed with calcined clay, sand and water, produced a material as hard as stone and without any need for firing”. The invention was patented in September 1859.
The procedure enabled the production of beautiful floor tiles at moderate prices.

In order to embed polychrome designs into the tiles, Larmande asked Auguste Lachave, a locksmith from Viviers, to design an item of manufacturing equipment: the bronze “dividers” intended to separate the colours, which were produced using marble dust.

These tiles were extremely robust and continued to harden as they aged.
Manufacture of the tiles spread from Marseille to Avignon. Initially intended for the middle classes, they were very quickly also found in working class houses. The tiles spread throughout Europe, the colonies and as far as Latin America. They were last manufactured in Europe in the 1970s.

Based on our knowledge of these tiles in terms of their provenance, age, how they are laid and how they will be used in future, we will propose a restoration procedure: sanding, stripping, surface treatment (polishing, chemical or natural wax etc.).

That little extra
Where decoration has worn away, it can be reconstructed.